ACT has announced big changes for September 2020. One addition is how superscores will be reported to colleges. Second, they will start to roll out computer-based ACT tests on the seven national test dates. Last but not least, ACT will allow students to retake selected sections of the test instead of having to retake the entire test. How might these changes affect your college-bound student? 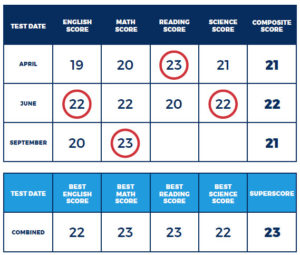 The ACT score reports will now include a superscore. Most students take the ACT or SAT multiple times. Each test is offered nationally on seven dates a year. Superscoring is used to increase a composite ACT score or total SAT score by including the highest section scores, regardless which test date they are from. Each college has its own policy for accepting superscores. Georgia’s public universities superscore both ACT and SAT; nationally more colleges allow SAT superscoring than ACT. Under the current ACT pricing, students pay ACT $13 to send each score report for the multiple dates. In the example shown, the cost of reporting three scores is $39 total for each college that accepts superscores. With the new ACT superscore report coming in 2020, they’ll pay one lower fee—but the pricing hasn’t been announced yet. Considering that students routinely apply to 5+ colleges, they stand to save significant money on score reporting. Students will also benefit when more colleges decide to accept superscores for ACT.

Retaking Selected Sections of the ACT

Starting in September 2020, students who have already completed a full ACT test can choose to retake one or more sections (English, math, reading, science, or writing) without having to retake the entire test. The main prerequisite is students must first take a full test (either paper-based or computer-based). All testing for individual sections will be computer-based, a potential disadvantage (see below). The good news is that sometimes students need to boost just one or two section scores, so this new option will save them time and money. The bad news is it may encourage students (and parents) to push toward more and more retesting, even though it may not be needed or in the student’s best emotional interests. Last, we’ll need for college admissions leaders to determine how this new retesting option will affect their interpretation of applicants’ test scores. For example, a selective college may decide not give the same weight to a high ACT math score if it took five attempts to achieve it – compared to another student who got the same score after only one attempt. Yes, some highly selective colleges do ask applicants how many times they took the ACT or SAT. The good news is that very few ask the question.

For several years ACT has used computer-based testing in the U.S. on a limited basis, for in-school testing done on school days in certain school districts or states. Starting in September 2020, computers will also be used in certain areas (in addition to paper tests) on the seven national test dates — for the full ACT test or for selected sections (described above). The main advantage of computer-based testing is greater security: it’s harder to steal a digital test than paper-based tests. A big advantage of paper tests is that students can use a pencil to write on a paper test booklet more quickly and effectively than using the highlighting tool on a computer. This poses a serious practical concern on the ACT because it’s such a fast-paced test. Many students run out of time and can’t get to all the questions. For example, the ACT math section allows only 60 minutes to answer 60 questions. That is precious little time!

The ACT reading and science sections each allow only 35 minutes for students to read information-packed passages and answer 40 questions. To help students manage the scarce time, we teach them to use strategies including annotating, underlining and marking up the test booklet while they read the passages, questions and answer choices. These techniques work very well when using a pencil and paper. Another big advantage of paper testing is the printed test booklet allows you to see in one glance the full contents of two pages, containing the entire passage and all the questions that pertain to it. Even though the same content will appear on the computer screen, you need to scroll to see the same all-encompassing display of information. The paper test is like reading a hard copy newspaper (remember those?!), where you can see two pages at a time, complete with headlines, articles, photos and captions all in one glance. You can read the same newspaper on a computer screen — but only in limited chunks with less visual context. When every second counts – and one missed question can cost one full point on the 36-point ACT scale – the paper-based test is a better choice than the computer-based test… until they stop using paper tests altogether.