While the language arts sections of ACT and SAT are quite similar, the math sections are quite different on the two tests. SAT math and ACT math cover a similar range of math concepts from pre-algebra to basic trigonometry, but they have different approaches to skill assessment.

The SAT Math test requires a deep understanding of a relatively small number of math topics, testing fluency, conceptual understanding, and application. About 60% of the math on the SAT is Algebra I and Algebra II. You need to not only understand how to solve an algebraic equation (fluency) but also be able to create an algebraic equation or graph to model and solve a real-world problem (conceptual understanding and application). Geometry appears infrequently. Word problems, real-world contexts, charts and graphs are plentiful

The ACT requires a relatively basic understanding of a wide range of math topics, while the SAT requires a deep understanding of a set of core concepts. Algebra is only about 30% of ACT Math, and it has a higher proportion of geometry problems. It also includes a few questions on vectors, logarithms, and matrices, whereas the SAT does not.

Other Differences between SAT Math and ACT Math

The sample problems below help illustrate the differences in question styles between SAT and ACT:

Most students when they read this SAT sample question, react with: “What? I have no idea what that question is asking.” Admittedly, this could have been asked in a much more straightforward way. That’s the style of the SAT; the questions can seem harder than they actually are and can send students off in the wrong direction. A much more accessible way to ask this same question would be, “The graph of the linear function f has intercepts at (-2,0), and (0,2) in the XY plane. What’s the slope of that line?” Then students would recognize this as simply asking for the slope of the line between two points.

ACT problems are more straightforward. The sample question here is clearly asking, “The slope of one of the lines is 3. What is the slope of the perpendicular line?” For students, they either know this or they don’t; there is no time available to sort it out. With only 60 minutes to answer 60 questions, students must move quickly, or they’ll run out of time. Although the overall pace of the ACT is faster than the SAT, most students can learn to manage time effectively using strategies and lots of practice.

ACT Math vs SAT Math: Which is a better match for your student?

When choosing which test to try first, we start by looking at your student’s algebra skills. If they’re taking Algebra II now, you may want to postpone the ACT-SAT decision until they get farther into the course. If they took Algebra II a while ago, they’ll probably need to refresh those math skills. In any case, at Dogwood we recommend that students take a proctored ACT practice test and SAT practice test (or the PSAT) to compare their experiences with the math (and other) sections. If two full tests are too much, we can administer just the ACT and SAT math tests in one sitting of 2.5 hours. After the practice tests are scored, we’ll schedule a family meeting to review the diagnostic report, consider your student’s specific strengths and needs, and discuss some recommended next steps for ACT-SAT testing. There is no charge at Dogwood for the practice testing or consultations.

How Much is Each Math Topic Tested on SAT and ACT? 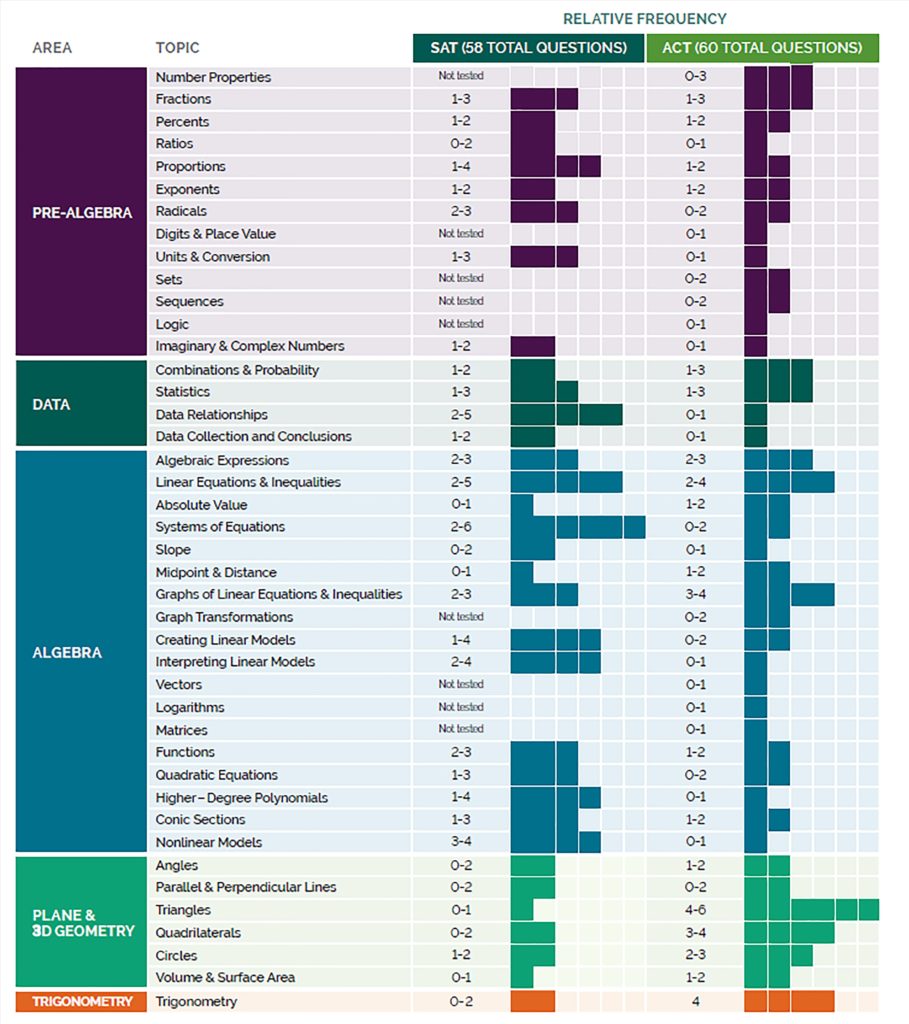