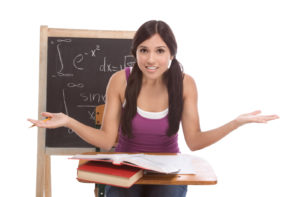 My mother was what we would now call math anxious, if not phobic. My daughter, on the other hand, was a math major, which always left me feeling like the transitional generation, capable of mastering standardized-test math problems and surviving college calculus (it’s one of the pre-med requirements) but never really connecting to the beauty or power of the subject.

So when I hear people talk about lack of self-confidence when it comes to numbers or intense math anxiety, I always think first of my mother, a college English professor who was terrified by the idea of calculating a 10 percent tip, and desperately grateful to leave it to any grandchild at the fourth grade level or beyond. (Little did my Depression-era mother know that I had taught her grandchildren to jack up the tips to 15 percent; it would never have occurred to her that anyone would willingly undergo both a slightly more difficult arithmetic problem and a slightly higher cost.)

New research shows that math anxiety is by no means an American problem, and is found in countries where students regularly outperform us in math skills. In a recent study, researchers from the University of Chicago looked at data from 64 countries participating in the Program for International Student Assessment, which tests 15-year-olds in math, science and reading skills.

“Math anxiety is prevalent all around the world,” said Julianne Herts, a study author and a doctoral student at the University of Chicago who works in cognitive psychology. “If you look within Japan, students in Japan who are math anxious aren’t scoring as well at math,” she said. “If you look between countries, countries where more students experience math anxiety tend to underperform.”

“There’s increasing reason to believe it’s a bidirectional relation,” said Alana Foley, a postdoctoral fellow at the University of Chicago in developmental psychology, who was the first author of the study. “Poor performance in math can lead to math anxiety, but there are also studies that point in the other direction; if you have math anxiety it disrupts your concentration.”

Even students who score high on math tests can feel a special worry around this subject, Dr. Foley said. Among high-performing students, she said, “math anxiety takes a bigger bite out of their performance.”

Other researchers involved in the study traced math anxiety back further into early childhood. Sian Beilock, a professor of psychology at the University of Chicago and the author of the book “Choke,” about performance and pressure, said that math anxiety “oftentimes relates most strongly to the performance of those kids who want to do well, who tend to be high achieving in school.”

A couple of years ago, Dr. Beilock and her colleagues published an article showing that parental math anxiety could be transmitted to children (you can take a test based on the assessment they used, to look at your own level of math anxiety). “The moral of the story is that parents likely play an important role, either for the positive or the negative,” she said.

There has been some overlap demonstrated between math anxiety and other more general types of anxiety, especially related to test-taking, but math anxiety seems to exist as a separate phenomenon; studies have shown increased heart rates when people were tested on math, but not on other subjects.

One problem is that we tend to believe with math that you either have the ability or you don’t, rather than assuming that your skills and abilities are the result of study and practice. “It’s an interesting phenomenon in our culture to hear highly intelligent people bragging about not being good at math, not being numbers people,” Dr. Beilock said.

Dr. Susan Levine, chairwoman of the department of psychology at the University of Chicago, agreed: “An educated person doesn’t go around saying, I’m not a reading person.”

Researchers believe that the skills — and the anxiety — are actually shaped even before children start formally learning math.

Dr. Levine said, “a lot of my work starts in the preschool years with the thesis that math learning begins at home.” Math skills at kindergarten entry, she said, predict not only later math achievement but also other important skills, including reading. “There’s some research out there that shows that when kids enter the kindergarten door behind in math, it’s hard to close the gap,” she said.

So what are those crucial math skills in early childhood? Dr. Levine said that although many preschool children know how to count, they don’t necessarily understand the meaning of the number words. By the time children are around 2, “They can recite the count list up to maybe 10,” she said, but “they don’t understand that the last number you reach is the set size; they don’t connect the counting” to the total. With children from 2½ to 4, “parents are often shocked when we bring kids into the lab,” she said. “They know the kids can count, but when we ask them to give me two of something they just grab a bunch of things.”

By kindergarten, children have additional skills; for example, they can understand that you can make five by holding up three fingers on one hand and two on the other, or four and one. Dr. Levine said they also can demonstrate what is known as flexible counting — that is, they can start from four or five, without going all the way back to one, or count backward.

“Parents embrace as part of their responsibility to get kids ready to read in school to introduce them to the alphabet and letter sounds,” Dr. Levine said. “They’re much more likely to think it’s the school’s job to teach math.”

Whether we realize it or not, the researchers say, those of us who get worried around math probably are less likely to talk about numbers and number concepts to our children. In a 2015 study, parents used a program called “Bedtime Math,” a mobile app that presented short numerical story problems to their children; the children’s math skills improved relative to children in a control group, Dr. Beilock said, but the improvement was strongest in children whose parents had math anxiety.

Working with the app might help dispel the myth that there are math people and non-math people, said Dr. Levine, and make parents less anxious and more willing to introduce math talk into their daily lives (let’s put five raisins in each cookie; let’s set the table, how many forks do we need?).

“Think of math as something that’s the purview of the home, not just the school,” Dr. Beilock said.